Why Full Length CD's Are Valid.

Recently it was reported that U2 was very unhappy that their latest release ( No Line on the horizon) had only topped the 1 million mark in sales and it was the lowest performing piece of recorded work in its history. It prompted this comment from bassist Adam Clayton "The commercial challenges have to be confronted. The concept of the music fan - the concept of the person that buys music and listens to music for the pleasure of music itself- is an outdated idea".

While its true that todays ipod generation is used to buying music by the song, and the concept of a full length CD actually being solid enough to listen from beginning to end ( like us old dudes like to do) is pretty rare today. I am thrilled to report that the CD is in fact alive. 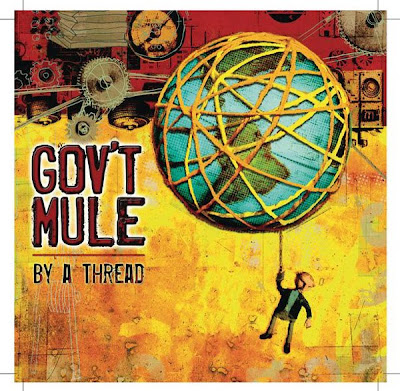 Gov't Mule
By A Thread
I know, "Yeah Mike loves Gov't Mule". While this is true, I feel I have to spread the news about this latest offering from my favorite band, because I feel its its best offering. Yes, perhaps even more so than its early work with Allen Woody. Its a collection of songs that reflect mature lyrical content and the ability to change gears and genres without losing what makes this band so good. The ability to reference the greats and yet be original and exciting. Its hard rope to walk on, but this band keeps doing it.
This is the 1st effort with new bassist Jorgen Carlsson ( who replaced Andy Hess, who appears on 2 tracks). Carlsson is a welcome addition to this band. He is loud in the mix and aggressive. Hess, while a good bassist in his own right, just didn't have much fire in him. This new bassist recalls Woody, and yet is very distinctive . I have had the pleasure to see Jorgen with the band, live 3 times. I instantly could feel the energy from this band rise up. I wondered if this would translate into a studio. I am stunned at how well it did.
Here is a track by track breakdown:
1. Broke Down On The Brazos- The track starts off with low guttural bass rumble and the Texas twang of Warren Haynes guitar. Just when you start thinking " Man this sounds like old good funky greasy ZZ Top" You hear the sound out of your right speaker of none other than lead guitar monster Billy Gibbons from ZZ dueling Warren for six delicious minutes. Nasty Nasty stuff.
2. Steppin Lightly- The gears change nicely into a funky stew that I can only imagine what this song will morph into when played live. Yes, danceable G-mule and its irresistible. Once again its Carlssons bass work that propels this song into a place that the previous post Woody lineup would have had a hard time pulling off this well.
3. Railroad Boy- This is a song that has been around since the 1800's. Covered by all sorts of artists. This is Gov't Mules take on it, and frankly, it sent chills down my spine. The lyric itself is chilling, but the stops and starts on this just adds to the drama. One of the highlights of this CD.
4. Monday Mourning Meltdown- A very moody piece that had elements of Pink Floyd in it and a middle section that wanders a bit into jazz. I love the risks that the band takes and how it pays off .
5. Gordon James- A song that starts off like a church hymn and develops into a nice midtempo ballad. Lyrically smart and about as commercial as this band gets. I say that in a good way. There will be no mashups or Kanye dropins.
6. Any Open Window- From the first notes of this track, you can hear Jimi dripping all over it. Its not just how much of the spirit of Jimi that is captured by Warrens guitar and vocal phrasing, its how galloping the rhythm section is. Mitch Mitchell and Noel Redding are channeled by Matt Abts and Jorgen Carlsson. Love it.
7. Frozen Fear- Not my favorite on this CD, but still a very solid Gov't Mule song. Sure it will grow on me with repeated plays. A Grower!
8. Forevermore- I have heard this song in concert on on solo Warren acoustic recordings. This version trumps the other arrangements. The middle solo and backing hammond B3 give it the darkness it deserves. Its a great song to expose the non converted fans to.
9. Inside Outside Woman Blues #3- If "Any Open Window" gave you a taste for Jimi. This will give you a buffet of Jimi, and Cream. 9 minutes of non boring nasty freak flag flying blues!
10. Scenes From A Troubled Mind- Warren Haynes writes some of the most dark lyrics I can recall, and yet as all good blues music provides. Its that mixture of pleasure and pain in the music and lyric that deliver the release that this song builds too. Another song that I can imagine morphing into something bigger live. I love the last 3rd of the song that really recalls Zep in a subtle way.
11. World Wake Up- A message song. Biting lyrically and a song that all of us can relate to on some level.
In summary. I love this CD. When you love music and you get something great like this, you just wish you could personally thank the artists that provide the goodness that is great music. But I would violate my restraining order if I pestered artists like that ( hahaha)
Slowly typed by Mike on 10/28/2009