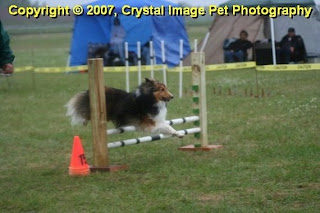 As most of you know, we have had a very hard week regarding the loss of our dog Reggie.

He was only 8 years old and was in great health up until about the first of this month. Suddenly, the dog that I had to always slow down eating, began to not want to eat. After trying everything and basically turning the house into a new outlet for pet food (good lord they have so many brands now) I knew this ...was not the case of a picky eater. So, we began a series of visits to the vet that gave me hope that we might clear this up with something simple. Last Saturday, I lost that optimism when I felt his lymph nodes around his neck. My worst fear. Cancer. We took a sample at the vet and X-rays . X-rays showed enlarged liver and spleen. We would have to wait until Tuesday to get the lymph node test. Reggie had completely stopped eating by then and was only drinking water. I knew what I needed to do for him and it completely broke my heart.

Reggie came to us after 16 great years with our Sheltie T.J. To be honest, I felt a little bad for him trying to follow such a great dog. However, Reggie was everything that T.J wasn't and in a good way. T.J was a dog that loved everyone and was very easygoing. Reg, he loved me and accepted others. He was constantly by my side. It didn't matter what I was doing or who was visiting, he was watching me waiting for something to do. Every morning (even to the very last day) he would run to the top floor of the house and watch me pull out of the driveway. I would give him a little beep of my horn and drive away with a smile on my face. We competed in agility together and won awards, he was a very smart dog and one of the most handsome shelties I have ever seen.

Tuesday came and my fears were confirmed. After weeks of suffering, he didn't suffer anymore . All of us cried very hard and I cried the hardest. Even though I knew it was the right thing, it tore me up.

The next day, I decided to go visit the place I took Reggie to train and watch some agility. I needed to be around a place where I could remember Reg when we were having our most fun. Out of the blue I received a call from one of the owners of the training facility, I had been talking to her about Reggie and she was checking on his progress. After telling her the news, she said that she had a puppy that would be perfect for me. I asked what kind and she told me English Shepherd. I didn't recognize the breed, but told her I would do some research and probably stop by. Well, the big man upstairs must have heard my prayers and felt my grief because this breed hit all of the check marks on my list. However, we are only a day removed from losing Reggie . I knew I was pretty vulnerable. Puppy/Mike. Uh oh.

So, I approached this very carefully. Lucky also that the person showing me this pup also had the same thing in mind. She just wanted me to spend time with the little guy and then take time to figure out my emotions before any kind of choice was made.

The dog was very cute(what puppy isn't ) confident and loving. It immediately came over to me and gently nuzzled up to me. Most dogs like me, and I could tell this one liked me. I took him outside and he and I played while I talked to the breeder. I asked all kinds of questions and felt very good about what I was seeing and hearing. I decided I needed time to think and research and talk to the family. We decided to meet this Sunday to meet the pups parents and grandfather. You learn a lot about temperament of the dog through watching the parents. I think this is a great opportunity and almost too good to be true. So, who knows, maybe this time next week I will be creating a new bond.

I love you Reggie. I miss the sound of your happy bark. Your growl and spinning when we watched tv, Your gentle way of showing love to Steven and Cherol. What I will miss the most is the closest bond I have ever had with a dog. You will never be forgottenSee More
Slowly typed by Mike on 7/28/2012

It is amazing how a pet comes into our lives and steals our hearts. Then what seems like such a short time, they leave us. You shared a very special bond with Reg and I am sure he is in a higher place looking down upon all the love and great memories he gifted you with through which seems like many from your mentioning’s. You are definitely right about saying goodbye, it is one of the hardest things to do, but knowing it is the best thing, I hope gives you some much-needed comfort during this difficult time.

A few years ago, I lost my 12-year-old Cavalier, Lady. She did not do a lot for activities, but guaranteed she was always there by my side. Whichever room I was in the house, she had to be. Each night when I would go to bed, it was certain I would be lifting her up onto the bed because she refused to sleep anywhere but beside me. I know about the feeling of loss of a dear pet.

I think you are very brave in the decision you had to make. Maybe that day, like you said, someone was looking down upon you, gave you what you needed at that moment, comfort. I think it is a wise decision to take the time you need first before making any new bonds. Best wishes.

Thank you for your kind words, I appeciate it. Its been almost a year since I had to let Reg go. I have moved forward with a new 4 legged pal, however, you never forget the ones that preceded them.

Nice information keep sharing with us. Please check out free hotmail contact number also. I hope it will help