Ah yes. Steven is happy after opening his gifts!!! I am smiling, and Reggie is cleaning my ears out! What more can a guy ask for!
Slowly typed by Mike on 12/30/2006 1 comment:

Sprucing up the blog!/ Christmas recap

If you look to the right.....you can see that I have added a counter to see how many people actually look at this thing we call "the blog"! I have also added a list of music ( called "music of my mind") that I am currently listening to. Yes, you can either look into it and see if you might like it....or do as most.....shake your head and say...."why doesnt this guy listen to anything that I have heard of!" :-) Last but not least.....I have updated my list of links....I will be adding more to this at a later time. The new version of blogspot is very easy to use and customize. (Otherwise I wouldnt be doing all of this spucing!) Ok....enough spruce talk!

Christmas was very nice. We spent Christmas Eve at my Moms, along with My brother and his family. Most of us were "under the weather" and not 100%, but had a great time laughing and EATING! Christmas Day was pretty low key, Cherols brother and his girlfriend were there and we had a fun time watching Steven play with his new gifts! ( I had a stiff neck and walked around like Frankenstein all day!!! very attractive!)

We received snow about 3 days before Christmas. Not much, but enough to pass as a grey Christmas. So we have got that goin for us! :-)

On Christmas Eve, the priest had a very interesting sermon. The main point was to NOT try and strive to make Christmas perfect. In fact, realize that like everyday, the day will be filled with imperfections. Enjoy the day, love the moment. I loved the message. I hope that many were able to just relax and let the blessing of the day wash over them. A very special gift from Mike Steven does great at his piano recitial! Seated next to Steven is his piano teacher Ms. Larson. Today Steven played a very nice version of "What child is this?" He is so fun to watch, mostly because he seems to love playing. He tells me that he doesnt get nervous at all, ahh he must have some of the old mans performing blood in em! :-)

*UPDATE* received this email this AM, from his teacher. Makes a parent proud

"Just wanted to again say that Steven played so well yesterday. One minor little glitch, but who cares! I was so impressed that he was able to play such a hard piece, but then again, he is Steven! I hope you noticed the difficulty of his piece and the others his age. He is playing well over his age level and I am proud of him." The top photo is in memory of my inflatable Santa with Reindeer and sleigh. It lasted all of one night in my front yard. It met its untimely demise because of a freak thunderstorm/overnight freeze....that fried its blower motor and created a 8 inch gash in the sleigh. But for the lucky few that witnessed this inflatable spectacle....it will be a night they wont forget soon! :-)

The Bottom photo is of Steven and I. We are sporting our fashionable WHO tee shirts. Yep. we look so ready for pg 15 of the Wal-Mart flyer! :-)

I received a email from my good ol pal Jeff informing me that he has decided to dip his toe into the world of blogging!

I feel like Yoda. He cites me as his inspiration to try this goofy thing called blogging.

Here is the link to his new blog! http://jefybal.blogspot.com/

I have also provided a nifty link to the right (SEE!)

Also, if you long time readers (YES THAT IS YOU, MAGGIE!) notice a change in the format on this blog...its because we have had a update!!! Yes, more creativity!
Slowly typed by Mike on 12/16/2006 No comments: 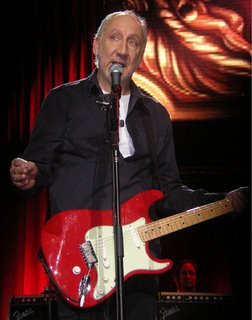 I had a great time Friday night ( 12/8) in St.Paul, seeing The Who! To be at the feet ( literally) of my rock hero Pete Townshend was truly a "am I really here" moment. To add to this, having my son next to me and dancing and singing right along with me...made it a night I wont forget.

The show started off with The Pretenders. As they walked out..Chrissie Hynde looked me right in the eye and smiled at Steven and I. I gave her the thumbs up and she shot it right back at me. Wow! I couldnt believe it....later on she commented to the crowd...."its great to see dads here with their sons'! Talk about personalizing the experience!

The Who show was something to remember. Roger Daltrey was sick with bronchitis and sounded pretty rough. He was coughing and spitting up between songs and looked weak. Pete also was blowing his nose between songs. They still put on a solid show, but cut it short by about 30 minutes. Pete came out without Roger for the encore and led the crowd in a rousing and unique version of My Generation and a very rarely played Naked Eye.

I was able to listen to the replay of the show on my Sirius radio the next evening. ( on the WHO channel #10). It still was a powerfull and unique show. To add to it.....I was right in front of the audience mics....and you can hear me yelling between songs!!!!!! 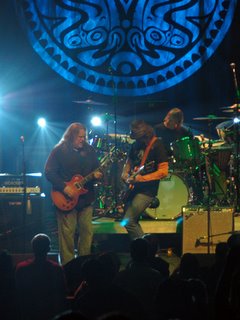 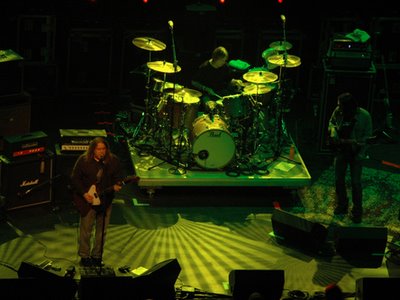 I settled my head on my pillow at a late 2 am this morning. It was a late night, but not a long night. It was a great concert, full of music that kept me on my feet and electric feeling that only powerful music brings.

The show was opened by Donavon Frankenriter http://www.donavonf.com/ . I was very surprised at how much I liked this guy. His set was very bluesy and had a throwback 70's synth sound. His singing is pretty laid back and most of his songs are along that line. I will be checking out his 2 cd's that he has released in the last couple of years.

Best crowd line of the night " Nice Hat #$#%$^%!" credit goes to the drunk biker behind me that didn't like Donavon's floppy leather hat. I thought it looked cool, but it would look lame on me. :-) I didn't feel it was needed for me to argue with the fashion conscious biker lad.

A quick note on the venue. The O'shaughnessy is located on the Campus of St. Catherines. Its usually a place that has concerts like Joan Baez or poets like Mya Angelo. Who knows why the Mule was playing in such a nice place??? Not a stain on the carpets or seats.....ushers that looked like they were running security for a Don Ho concert....just seemed a bit weird.....but a great venue to see the show. Sound was tight and not a bad seat in the house. Sad to say...but they will have to clean the carpets..... ( I kept my area nice and tidy!)

I will post the setlist below and give some nifty comments!

Set 1
Thorazine Shuffle- A great song that went from a slow burn to an all out screamer.
Banks of the deep end-
32/20 blues-
Child of the earth- Off the new cd- love this song..
Gameface-Mountain Jam-Gameface- epic version of the song...with ABB middle
Unring the bell- another new song....was hoping they would play this....Funky with a capital F!
Endless Parade- The run of great songs continues....
Reggae Soulshine- They play the original alot....this version ( regagae) was a treat!

Bad Man Walking-
About to Rage-
Brighter Days- another song I was hoping to hear......loved it
Like Flies-
The End-Drums- The End- Yep, the Beatles Abbey Road classic....10 minute middle solo!
So Weak So Strong- This song really hit me...love the lyric...have played this alot at home
Bad Little Doggie- I had the opening guitar riff in my head for a couple days before the concert
Mr. High and Mighty
Brand New Angel- Another great song with a very emotional solo in the middle/end

Encore:
All Along The Watchtower- with Donavon Frankenreiter and Eric Brigmond

After almost 3 hours of music and the clock nearing 12:30 am....this late nite Jazz/Blues verson of the Bob Dylan/Jimi Hendrix classic...was the perfect way to cap off a great night. It lasted about 12 minutes and seemed to go by waaaaaay to fast.

Words on a page really never capture the whole feeling of a concert. Trust me....this was a keeper!